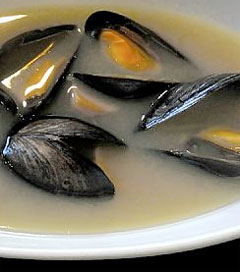 Over the next seven weeks, a New Zealand-inspired menu is on offer at the Art Institute of Pittsburgh’s Taste of Art Restaurant. The menu features traditional dishes from the region including breaded oysters with horseradish sauce, Maori barbecued salmon, kiwi-lime tart and more. Part of the International Culinary School of the Art Institute of Pittsburgh, Taste of Art is a student-run restaurant that doubles as the “à la carte kitchen” class. Every quarter, new students come in and the menu changes.

Instructors Roger Levine and David Russo led this quarter’s eight students through an intense process to design a new menu featuring their own culinary creations and New Zealand food. Levine and Russo also are on hand to review their student’s creations.

Last week, students paraded a number of recipes before Levine for review. Among them were puff pastries filled with chocolate and brie, sitting in white and chocolate drizzle; a New Zealand dish of fresh mussels arranged artfully in a clam-based broth (pictured); and a breakfast soup that included bacon, potatoes and a poached egg, topped with an herb waffle. “Waistline be gone,” the instructor said when student Jodie Bimle put down a bowl of her creamy, homemade coffee-bean ice cream.