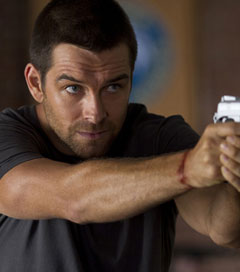 New Zealand actor Antony Starr is carving a name for himself in the American TV industry, with the second season of his show ‘Banshee’ premiering this month.

In an interview with The Star Online, Starr, who plays the show’s lead character, Lucas Hood, describes the intense physical work of the role and the effect it has for him.

“Any day there is a fight sequence, you know you are going to get some nicks and bruises. We have a great stunt team that keeps us – above all – safe,” says Starr.

Starr has received favourable reviews for his performance in the hit US show, with The Wall Street Journal  saying of his performance that: “no one delivers punishment with more skill than the hero of the series, Lucas Hood (Antony Starr)… Mr. Starr’s Lucas can take out four, maybe five thugs at once, as the first episodes show—a reliably enchanting sight”.

The first season of Banshee received critical reviews, with Hollywood Reporter calling it, “taut, entertaining and smart enough”, and winning an Emmy in 2013 for Outstanding Special Visual Effects in a Supporting Role.

Though based in the US for filming, Starr admitted to The Star Online that he prefers the privacy of his Auckland home when he’s not filming.