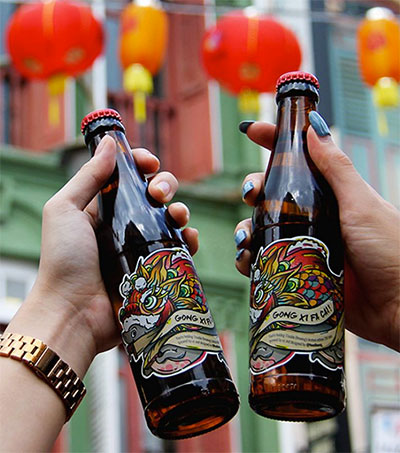 Singapore-based craft beer microbrewery Trouble Brewing, founded by New Zealander Joseph Barratt, has teamed up with a local illustrator for a specially designed bottle, which contains beer styles such as its Summer Ale, Dutch Pilsner and American Pale Ale.

All the beers are freshly produced at its microbrewery facility in Tuas, which is also home to some of the big boys of the brewing world such as Asia Pacific Breweries.

The bottle labels, which are a nod to the Year of the Dog, come emblazoned with the cheeky design of a dog in a lion dance costume chasing its own tail.

The collaboration is among the first few major projects for Trouble Brewing, which was established last November by Barratt. It offers a service, through troublebrewing.com, which allows customers to personalise and customise everything about their beer, from the beer inside the bottle to the label outside and the colour of the bottle cap.

“The craft beer world has a lot of beer snobs and we’re trying to be the complete opposite of that, so our focus is on drinkability,” says Barratt, 32, who also runs a public relations and content marketing agency.

The New Zealander is a journalist- turned-entrepreneur who moved to Singapore in 2010.

Already, the company is in talks to bring its model to other markets. “It’s quite an efficient style of brewing, so we’re looking at metropolitan areas such as New York, Canada and Hong Kong,” Barratt says.

“We’ve already secured enough contracts that we’ll have more than a million dollars in sales in our first year.”