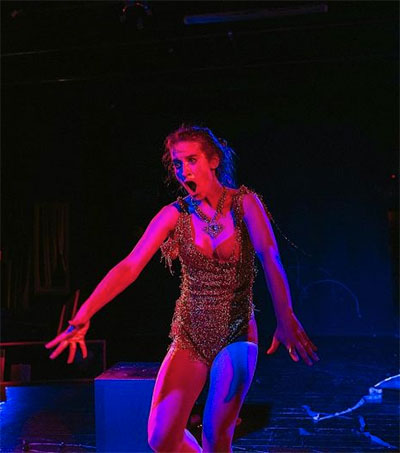 In If There’s Not Dancing At The Revolution, I’m Not Coming, New Zealander Julia Croft performs a striptease and dissects the objectification of the female body in pop culture. Croft took the show to this year’s M1 Singapore Fringe Festival.

“There are light-hearted moments at the start of the 55-minute show as she divests herself of layer after layer of costume, reappearing in outfits suited to the sketch of the moment,” Straits Times arts correspondent Akshita Nanda writes.

“She wears a dressing gown for the scene from the 1997 movie, Titanic, in which Jack sketches Rose nude. She dons a tutu to perform to music from Swan Lake and appears in a prim dress for the scene from Notting Hill (1999), in which Julia Roberts begs Hugh Grant to love her. Props stashed about her person pop out comically, including a cut onion – to induce tears – and a burger and fries, while she gyrates in cut-offs to a song with sexually explicit lyrics.

“If There’s Not Dancing At The Revolution does not preach. It puts forward what people already know, that Western – mostly American – pop culture is marketed and consumed around the world.

“Similarly, the unhealthy way women are depicted in this media – cut up, assaulted, sexualised for heterosexual male pleasure – is taken in and assimilated in the general body of people.

“She takes curtain calls naked, confident in her skin and in the audience.”

She is from Auckland.

Tags: If There’s Not Dancing At The Revolution I’m Not Coming  Julia Croft  M1 Singapore Fringe Festival  Straits Times (The)