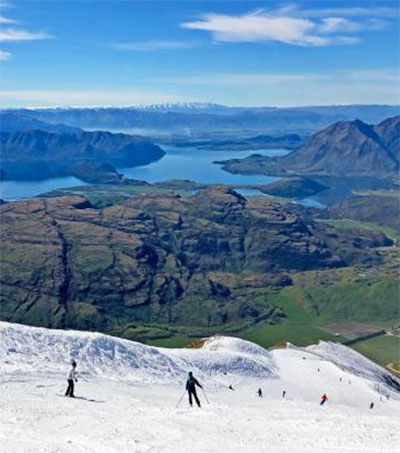 “As views from ski slopes go, this has got to rank among the most dramatic. In front of me the mountainside drops off, revealing the valley floor below, a craggy patchwork dominated by Lake Wanaka and framed by snowy peaks in the distance,” Ben Clatworthy writes for The Times.

“I’m skiing [at] Treble Cone, having swapped summer at home for winter in the southern hemisphere, and putting in some turns when most people are thinking about their two weeks in the Med – the Antipodean ski season runs from early June until about October, depending on the conditions,” Clatworthy writes.

“And it all feels rather special. The sun is blazing, there’s hardly another skier in sight and the snow is in great condition. We have just been skiing untouched powder in Matukituki Basin and now we’re preparing to hop to the other side of the mountain to tackle a few runs in Saddle Basin.

“It’s a long way to go for snow, but if you’ve missed out on hitting the slopes this season, or fancy a big adventure with skiing thrown in, New Zealand may be the answer. However, it comes with a warning: if you’re used to skiing in the refined resorts of Europe, a trip to the ‘ski fields’ (as they call them here) is a rather different kind of holiday.

“‘You really have to want to ski in New Zealand,’ says Richard Birkby, who moved from the UK and works at the resort. ‘It’s not like being in Val d’Isère with the slopes passing the front door to hop on to. You have to make an effort and I think that’s a good thing.’”