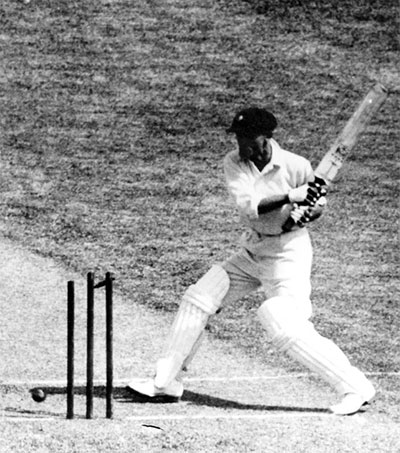 An unemployed New Zealander with an eye for sporting memorabilia has hit the cricket world for six by buying a rare bat once owned by the great Australian batsman Sir Donald Bradman, Roger Maynard writes for British newspaper, The Times.

Christchurch man James Sanders was the only bidder when it was sold at an antique auction in the South Island. He has not revealed the price he paid for it, Maynard reports.

It has since emerged that the bat could be worth about $40,000 because it not only has Bradman’s signature on it, but it also bears the signatures of the 16 members of the infamous Bodyline team including Douglas Jardine, the then England cricket captain.

The Bodyline scandal refers to the bowling tactics of the English team in a Test series in Australia in 1932 and 1933. Faced with trying to beat Bradman, widely perceived as the game’s greatest batsman, Jardine’s plan was to bowl at the bodies of the Australian players. It caused outrage across the country after one Australian batsman collapsed with a fractured skull. Wisden, the bible of cricket, described the matches as “probably the most unpleasant Test [series] ever played”.

Sanders said that the bat was part of the estate of someone who had died and that he was the sole bidder.

He admitted he was excited before the auction but had not fully appreciated its value.

“All I knew was that it was a Bradman signed bat and I thought I’ll go and have a crack at it,” he told The New Zealand Herald. “I knew it was something special but I got really excited when I got it home and realised he had owned it.”

“The greatest cricketer of the 20th century, the biggest event in the history of cricket – that’s the Holy Grail right there,” he said.

Sanders who kept the bat at home for only ten days, hopes his decision to sell the bat at an auction in Australia later this month will mean it returns to where it belongs.