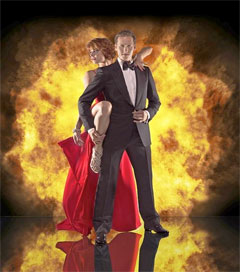 Professional New Zealand Strictly Come Dancing star Brendan Cole, 36, who has appeared in all ten series of one of Britain’s longest running television programmes, has built up a following of his own, with the live show Licence To Thrill touring Aberdeen, Perth, Glasgow and Edinburgh this February. Licence To Thrill is Cole’s second live show and has, he says, “got my fingerprints all over it”. It features a 14-piece band and six dancers. After ten years dancing in the shadow of celebrities on Strictly, how does it feel to be out there on his own? “It’s the best thing I’ve ever done professionally,” he says. Cole was born in Christchurch. He has also judged New Zealand’s own version of the show, Dancing with the Stars.