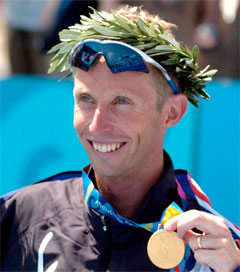 Our Three Greatest Male Triathletes of All Time

A trio of New Zealanders are named in an elite “25 Greatest Male Triathletes of All Time” list, with Auckland-born Hamish Carter (pictured), 42, taking the No 10 spot on Triathlete Europe’s lineup which, amongst other attributes, judged the men on longevity, the quality of competitions entered and the quality of the era during which they competed.

“Over the course of 1997 to 2000, Carter may have been the most consistent top performer on the [International Triathlon Union] (ITU) circuit,” the sports source said. “With 12 World Cup wins to his name and an incredibly consistent record that rarely had him outside of the top 10, Carter added the 1998 ITU World Cup championship.

“For winning the Olympic gold [at the 2004 Athens Olympics], Carter gets the nod over [German Normann] Stadler. Historically great cycling and a pair of Kona, Hawaii crowns simply don’t override the biggest prize in athletics, backed by a long list of other impressive short-course achievements. Carter [has] an ITU Olympic distance world title and a collection of impressive non-championship wins. Again, Carter’s Olympic gold pushes him over the top.”

Taupo-born Bevan Docherty, 36, “who famously was the only pro to beat Lance Armstrong in the disgraced cyclist’s first race as a pro triathlete since retiring from cycling in 2012”, came in at No 13. Cameron Brown, 41, winner of 10 Ironman New Zealand competitions sits at No 23.