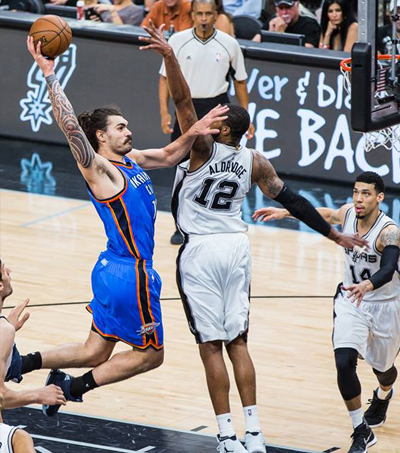 The Untold Story of Steven Adams

When Thunder center Steven Adams arrived at his first NBA training camp, he knew virtually nothing about the NBA. There was a lot of shrugging and no deference when he started playing, which unnerved a long list of opponents. Today he has matured and has developed a reputation for being unshakable, as reported by Brian Windhorst in an article for the ESPN.

“He’s just so high energy, so wide-eyed. He’s not easily impressed; he doesn’t take things too seriously. I think that’s the culture from his background,” said teammate Nick Collison.

“He’s all about, ‘Get over yourself.’ He didn’t grow up with the dream to play in the NBA, and it shows.”

Steven Adams, the youngest of 18 children, grew up in “Rotorua, a picturesque city on a chain of lakes in central New Zealand”, which is known for its hot springs and its geysers. After his father Sid died of stomach cancer, he stopped going to school and started hanging out with some members of the Mongrel Mob – a local gang- though he never officially joined. He needed help.

His brother Warren, who had played basketball on the New Zealand national team, called a former teammate Kenny McFadden, who was influential in youth basketball nationwide. McFadden took a chance on the youngest Adams and arranged for a scholarship to Scots College, a century-old Presbyterian school in Wellington, according to the article by Windhorst.

McFadden didn’t stop there. When Steven showed up in Wellington, his clothes were ragged, his reading and writing skills were poor and his attitude was worse. So McFadden found a teacher willing to take in Adams, clean him up and mentor him.

“I’d never worn a tie before. I was a bushman,” said Adams.

“Once the grit, hair and fear had been washed away, the educators found charming personality.” For years his coach worked with Adams on his basketball skills, starting with 6 a.m. workouts before school, and then another two hours after school.

“I just got addicted to getting better,” said Adams.

“My coach gave me a goal to get a tip dunk in a game — you know a putback dunk off a rebound. I had never done that. He told me that he’d get me a pair of new shoes if I did it. I just kept trying. I couldn’t get it, couldn’t get it, couldn’t get it. It took me a year or so. Finally one game, I got it. It happened. I was really pumped, I felt really good. When it finally happened, I didn’t care about the shoes. From there, I got addicted to that success, that accomplishment.”

When he was 16, the Kiwi was invited to Adidas Nations, a camp for international prospects in Los Angeles, where he played with the Latin American team, because there were no other players from his region, as reported in the ESPN article.

Adams ended up playing a season at Pittsburgh, a connection established because coach Jamie Dixon had played professionally in New Zealand.

“He’s a bit of a miracle because there’s not much basketball there (in New Zealand),” said Mark Bryant, a Thunder assistant coach.

“Where he came from they’re tough, because they all play rugby, but if he didn’t have Kenny, there was no way he’d be where he is today. He found him, he taught him and he got him seen.”

Today he has evolved. He doesn’t scrap with opponents as much anymore. The Kiwi basketball player also supports young players in New Zealand with scholarships and training camps.

“Adams has learned his peers’ names and tendencies. Now he studies Tim Duncan and Marc Gasol. Adams’ minutes and his production per minute have crept up: This season, he finished the regular season with the 12th-best defensive real plus-minus in the league, and a top-50 overall rating.”

“All of it is very slow. It’s going to get a long time to get things to where I want them,” said Adams.