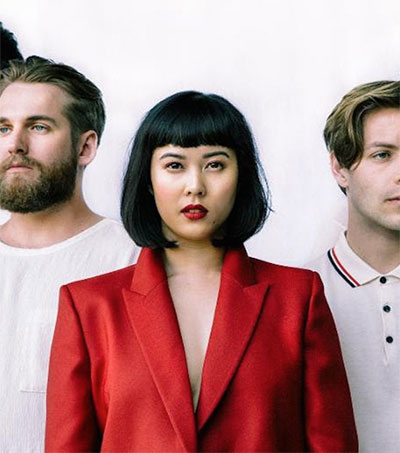 The Naked and Famous Lay Low

“All The Naked And Famous do is deliver hits,” according to Boston-based online music magazine, Vanyaland. “The New Zealand-[formed], Los Angeles-based electronic pop group first crashed our playlists with 2010’s incredible Passive Me, Aggressive You album, which birthed modern standards like ‘Punching in a Dream’ and ‘Girls Like You’.

“In July we hyped the LP’s lead single ‘Higher’, and now comes another catchy-ass jam by the name of ‘Laid Low.’ The lyric video for the punchy glow-pop track dropped a few weeks ago.

“This week, The Naked And Famous head out on a criss-crossing North American tour that kicks off 21 September in Tuscon, Arizona and wraps 30 November in Oakland, California. Along they way, they play Royale in Boston on 10 November, a very impressible triple-header bill with XYLØ and The Chain Gang of 1974.”