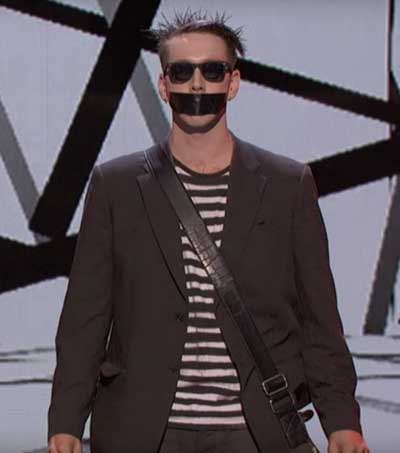 America’s Got Talent star Sam Wills, aka Tape Face, “has finally spoken out about his act’s remarkable success on the show,” as reported in The Daily Star.

Wills’ “audition was watched by more than 39 million people on YouTube and captured the imagination of judge Simon Cowell.” His quarter final performance “was the most viewed out of all the acts with a staggering 4.8 million hits,” as reported in the article.

The New Zealand- born comics’ mime act “involves having a black piece of tape across his face while performing a series of sketches using props.”

In response to criticism he received after his last performance that sealed his place in the semi-finals, he said:

“If anything, in the next stage I’m going to do less – in a sense – making more of a point to do less. I’m not taking it seriously – I want to do what I do as a character first and foremost. As a comedian, there will always be people who will hate you, so I’m just sticking to my roots,” he said.

The comic also revealed a rather unusual thing he does at every place he visits.

“Whichever gig or concert I go to, I always stick some tape somewhere as a little momento that I’ve been there,” he said.

Wills nationwide three-month tour will kick off from September 6.