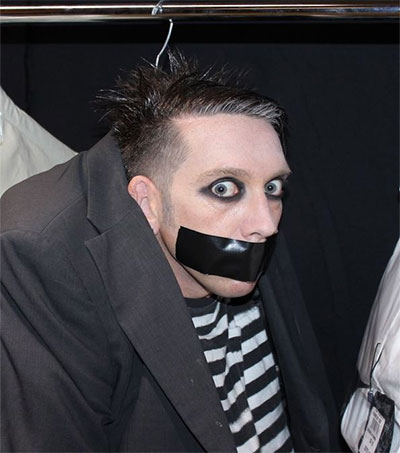 America’s Got Talent sensation Tape Face will be performing at the Attucks Theatre in Norfolk, UK on 20 February 2018. Sam Wills is a 39-year-old New Zealander who lives in Lincolnshire but as his Twitter account says, “Tape Face is exactly where he should be.” Arts website BLOUIN ARTINFO reports.

“His clever, humorous and edgy comedy act on YouTube as a part of the America’s Got Talent show has gone viral ever since it was released. The likes of Simon Cowell have identified him as the modern day Charlie Chaplin while the Broadway World UK noted that his crazy macabre act is almost reminiscent of Edgar Allen Poe and Chaplin,” the site writes.

“It is high time to book the tickets but one can be rest assured that there is no safe seat among the audience once Tape Face is on stage as his 75 minutes act involves a lot of interactive sessions. Even Mel B of the Spice Girls had to wear a toilet seat on stage for one of his acts.

“The trademark black painted eyes and spiky hair with industrial tape across the mouth adds to the flavour of his performances but has its own hazards – consecutive days of performances leaves a mark on Sam Wills’ face. But the man who has been earlier associated with the circus as well as magic, is keen on leaving the audience in splits each time in his very own way.”