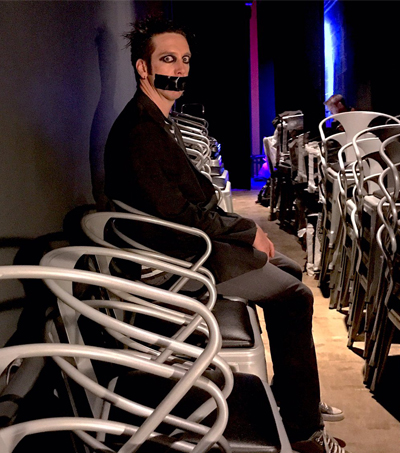 37-year-old New Zealander Sam Wills’s aka Tape Face – formerly known as The Boy With Tape On His Face – spoke with the Evening Standard’s Bruce Dessau about ambition and how he came to be “exactly where he should be”, which is also his twitter tagline. He is about to start a seven-week run at the Garrick Theatre.

In 2016 the New Zealand comedian “made a splash in the US, reaching the final 10 of America’s Got Talent. His unique set-pieces included holding up two oven gloves and miming to Lionel Richie’s endless love and resting his chest on a stool and spinning around like a sky diver.”

On ambition he said: “I used to have a five-year plan. I’ve done that so now I’ve got a 20-year plan.” The final stage of his plan comes as surprise. “I want to open a bookshop. A tiny one. I want a business I can happily lose money on. I’m going to call it no parking, sell only 100 books, t-shirts and two types of coffee. And you can only be in it for 20 minutes, once a day,” he said.

“This thoroughly modern mime artist who makes clowning cool has clearly given the matter plenty of thought. That’s his style,” writes Dessau.

“In 2010 he was nominated for Edinburgh comedy award best newcomer and in 2012 he picked up the special panel prize. Conquering the Edinburgh fringe was part of the original five-year plan.”

Tape Face’s shows “are incredible, joyous occasions, attracting audiences of all ages. Some fans even become part of the performance, plucked from their seats to join in. What is amazing is that while the thought of this might be buttock-clenchingly scary for many, even reluctant conscripts rise to the occasion.”

“Wills’s story is the ultimate running-away-to-the-circus tale. His father had an antique shop. There was no showbiz in his blood. He was unsettled at school so he was taught at home and when he was 12 he was given a magic set and was instantly hooked. He started performing to friends and, aged 19, went to circus school in Christchurch. He was soon travelling the world as a street entertainer,” as reported in the article.

“I first came to London in 2007 and did a terrible show on the South Bank. I made about £8. Ten years later I’m at the Garrick,” said Wills.

“Taping up his mouth was a spontaneous attempt to shut himself up,” writes Dessau. “I wanted to do a silent act but I couldn’t stop talking,” explains Wills. It worked and a star was born.