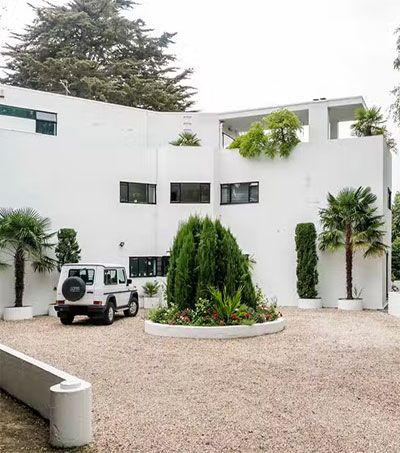 High and Over is no ordinary home. This legendary concrete, Y-shaped building, designed by New Zealand-born architect Amyas Connell, is the UK’s first modernist house, deemed to be “of outstanding importance” by English Heritage. And now, it is for sale, Emma Magnus reports for the Evening Standard.

The home, completed in 1931, was built for Bernard Ashmole, an author and art historian who later became keeper of Greek and Roman antiquities at the British Museum.

Given Ashmole’s classical background, Connell’s design combined the straight lines and blocky geometry of modernism with Roman influences – including, for example, the Roman Garden with its swimming pool, dug by hand by Ashmole and his gardener.

When High and Over was completed, a British Pathé news clip described the house as a trailblazer, stating: “One leaves this house feeling that a courageous thing has been done and a purpose fulfilled, and that a home has been built that is both practical and beautiful.”

Photo by The Unique Property Company.