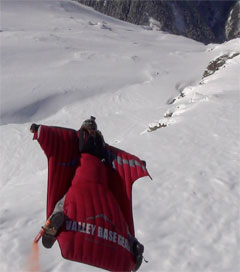 Daredevil New Zealand BASEjumper and professional skydiver Dan Vicary was recently filmed leaping from a helicopter over the Silberhorn Mountain in Switzerland, supported only by a nylon wingsuit.

The astonishing footage was taken by American stunt jumper Brian Drake, flying a few metres behind Vicary, never letting him out of shot.

“Normally I allow for a few jumps, because there are so many variables,” Drake, 33, said. “You’re flying very close to the ground and the wind can be unpredictable, though we usually try to fly on a day with as little wind as possible. It’s a high risk environment so you have to be constantly adapting.”

For their next stunt, the pair plan to glide all the way down a canyon in the French Alps, despite it being as little as five metres wide at points.

Vicary, a former New Zealand MotoX champion and white water kayaker, is the co-owner of ValleyBase Gear, a speciality BASE equipment supplier, in Lauterbrunnen, Switzerland. He is also an instructor at Skydive Verbier, a luxury helicopter skydiving business in the Alps.