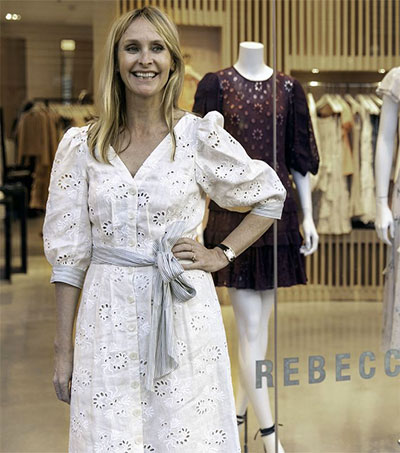 With $600 in her wallet, New Zealand native Rebecca Taylor moved to New York with dreams of starting a fashion line. She cut and sewed at a Brooklyn kitchen table that she built herself. The Los Angeles Times talks to Taylor, 48, about her new flagship store in California.

Taylor, who is originally from Wellington, recently made her Newport Beach address in Fashion Island, which opened in 2011, the flagship store in California.

“I have a fascination for anything that feels rustic and authentic,” Taylor said. “It just felt magical here.”

Taylor stopped by the boutique last month for a meet-and-greet shopping event, where proceeds from sales raised funds for National Charity League, a nonprofit comprised of mother and daughter members committed to community service, leadership development and cultural experiences.

Her latest is a new label, La Vie, a collection of reimagined casual wear with nods to New York and Parisian chic fashions. The clothing includes off-the-shoulder print dresses, jeans inspired by a swatch of hand-painted, vintage French wallpaper, and embroidered tank tops.

“When I hear that women feel confident and beautiful in these pieces, it’s mission accomplished,” Taylor said.