New Zealand beat South Africa 11-10 after withstanding an onslaught in the final chukka, to win the BMW polo series 2-0 in Durban. They won the first test 10-8 and showed the benefit of professional experience,…

Getting Jiggy: Bolstad Axes the Competition at ESPN Outdoor Games

Dave Bolstad “considered to be one of the world’s best” of Taumarunui won the most medals at the inaugural ESPN Outdoor Games held in the last week of July. The timber expert and world champion axeman…

Biking Versus Hiking and the DOC Peacemaker

The New Zealand Presence at Wimbledon

Unfortunately it wasn’t a tennis player: “New Zealand’s profound influence on international sport goes beyond the haka and influencing the bidding of World Cup football finals. Consider, for example, Aorangi Park, the area of the All England…

Kiwi Behind the Scenes Racing Legend

“She is perfect and I think most people agree.” Efficiency, accuracy, reliability and above all loyalty are the words the Sydney Morning Herald uses to describe Sue Hutchinson, the first female to hold the position of…

“I Never Thought the World Cup Was So Important to So Many People.”

Call it Kiwi modesty, call it naive call of the week, but we had to mention it somewhere. After all it may not be New Zealand’s proudest, or smartest, moment, but in terms of international achievements…

As the New Zealand women’s softball team hopes to reclaim glory at the Olympics, they place a great deal of expectation on the shoulders of Gina Weber as the Vancouver Sun reports: “There was a -time…

In an article deploring the emphasis on sex over substance in the sporting press, the Irish Times compares New Zealand hockey’s Mandy Smith to Anna Kournikova. This, following a 3-0 drubbing of World and Olympic champions Australia….

“I’m Quite a Fearful Person Actually”

Sir Ed might have to do some convincing – he will go down in history as one of the Twentieth Century’s great adventurers. The Independent asks if the 81 year-old has any mountains left to climb,…

Kiwi baseball player Travis Wilson, who is a rookie with the Atlanta Braves, has been selected to play in the US vs the World All-Star Futures Game – a strong indication that he’s on track to…

World set to discover the rigours of the Southern Traverse

“One of the world’s most prestigious adventure races, and the cornerstone of global media company announce a new partnership in adventure racing. Discovery Channel will be the exclusive media sponsor of the Southern Traverse (New Zealand),…

“Even Mike Tyson would have been impressed. Fighting with the savage explosiveness of the former champion, David Tua needed only 51 seconds to stop Obed Sullivan and firmly establish himself as the heavyweight division’s leading challenger.”

Wordplay No Game for Kiwi King of Scrabble

“Nigel Richards was something else. The man of the tournament, considered by many to be the world’s best scrabbler, thrilled everyone with his clinical skills and microscopic reading of the game.” Nigel has a record six straight…

Will Nigel Richards from New Zealand sweep the board and take home the biggest champion’s prize in Malaysian Scrabble? How far can the local champions take the game to the best in the world? The questions… 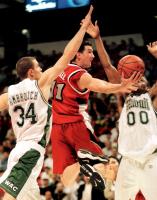 New Zealanders showed their domination at the Kuala Lumpur International Towerathon 2000 in both the men’s and women’s categories. Jonathan Wyatt broke his own record to win the event, climbing the 2,058 steps of the tower in 10.39s….

The Greatest Rider of the Century

As Mark Todd prepares to leap the final fences of his distinguished career, The Time’s Simon Barnes heaps lavish praise on the New Zealander who is “without peer” in the equestrain world.

Tua to Lewis: “It’s Time to Face the Music”

“The fans need to see David Tua destroy Lennox Lewis. He’s tailor-made for me.  I Respect what he’s accomplished, but I believe I have the style to knock Lennox Lewis out” …

Global Soccer show Futbol Mundial profiles three young New Zealanders who’ve made the long journey to the English town of Barnsley in the hope of launching a professional career.

I’m Gonna be a Contender

David Tua has the respect of World Heavyweight boxing champ Lennox Lewis, “I think Tua deserves a shot”. A possible title fight is lined up for later this year.

Without a Fault, World Champ Wins

Blyth Tait of New zealand, the reigning world and Olympic champion, rode Welton Envoy to a faultless round over all 16 fences to win the Rolex-Kentucky Horse Trails.

How good are the Auckland Kingz fans? Up there with the best, it seems. While the Kingz may have enjoyed a topsy-turvy season, their fans have consistently been hailed as the best in the NSL -…