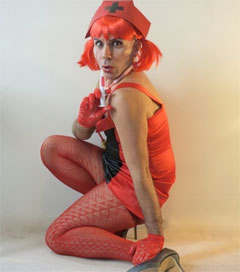 Spanky Pays Tribute to His Firecracker Mother with New Alter-Ego

Cabaret star Spanky, aka Rhys Morgan, says the late Amy Winehouse and his straight-talking New Zealand mum were among the many muses for his latest show Dead Bitches, which he performs as part of Perth’s Fringe World from 10 through 18 February.

Morgan says the no-nonsense Nurse Honeypot is based loosely on his “firecracker” Kiwi mother, also a nurse.

“Not only does the accent sound funny but I think there’s something really in these people who are real sharpshooters and they shoot from the hip. But underneath they’ve got hearts of gold,” he says.

The New Zealand-born performer became a London cabaret legend during his seven-year residency at the infamous Bistrotheque venue.