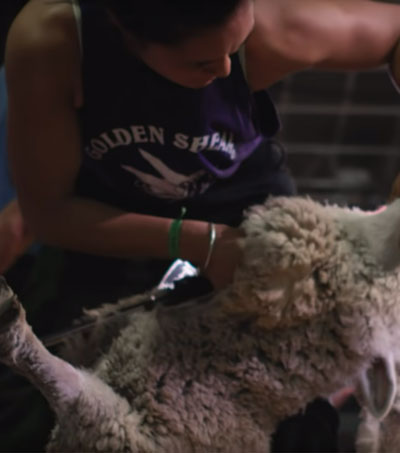 “Female shearers across the ditch are celebrating the anticipated release of a film shining a spotlight on their industry and gender. The trailer for She Shears featuring five female shearers from New Zealand was released online last week, ahead of its world premiere at the New Zealand International Film Festival on October 11,” writes Cally Dupe in an article for The West Australian.

“The film profiles five female shearers, two legendary and three in the making, as they head for black-shirt glory at the world’s premier shearing and wool-handling championships, the Golden Shears in Masterton, held each March,” writes Dupe.

The film was created by Miss Conception films, and is directed by Jack Nicol and produced by Conder and Ainsley Gardiner.

“She Shears shows a slice of New Zealand that hasn’t been seen on screen before,” said Nicol.

“It’s a heartwarming, feel-good story about five incredible women at the top of the game. We hope people love it as much as we enjoyed making it.”

“I can’t wait for audiences to see the strong, inspirational women featured in our film,” Conder said.

“Sheep shearing has tradition-ally been a men’s sport, but these women prove anything is possible if you put your mind to it.”