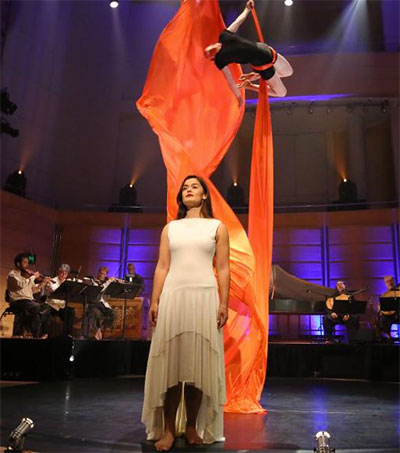 Acclaimed Australian Brandenburg Orchestra has teamed up with Auckland soprano Natasha Wilson and circus company Circa to present Spanish Baroque at the City Recital Hall in Sydney.

Wilson, 23, was invited by Brandenburg artistic director Paul Dyer to be the voice of Spanish Baroque, a show where she sings Spanish, Catalan and Italian music for the orchestra’s second collaboration with Circa.

Wilson says her performance is not about trying to block out the performers and get on with hitting the right notes. It’s actually the opposite.

The programme includes music by Spanish composers including Santiago De Murcia, and Isaac Albeniz who based much of his work on folk idioms.

Wilson finished her postgraduate honours degree at the University of Auckland in 2016.

Spanish Baroque is on until 12 May.

Original article by Elizabeth Fortescue, The Daily Telegraph, May 4, 2017.