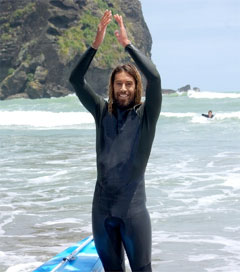 New Zealand-born surfer and activist Dave Rastovich has completed his 350km solo protest paddle mission from Taranaki to Piha, to raise awareness for the nearly extinct Maui’s dolphin and the hazards that seabed mining presents to the region. What inspired Rastovich to paddle the distance, ESPN asked. “It really blew me out that there were places in the world where you couldn’t surf after it had been raining and that animals were dying because of the water quality,” Rastovich said. “We thought we could make some noise and put pressure on the government to stop these [mining] proposals from going through and to protect the Maui’s dolphin. We also wanted to help educate the people of New Zealand about the dangers involved with seabed mining.” Rastovich lives in Australia.