New Zealand Nature on the Edge of London

An oasis of calm – in the form of a 105-acre wildlife reserve – has been developed just seven miles from the bustle of the centre of London. The Wetlands Center includes a New Zealand white…

New Zealand’s geographical islation has allowed farms, orchads and tree plantations to remain relatively free of pests and disease that could push up production costs and reduce market export access – but it’s isolation also means it…

Hard Work Starts to Pay off for Kiwi Organic Pioneers

At first farmers were concerned labeling certain products ‘organic’ would tarnish others as inferior, but many are beginning to see that increasing demand from consumers, home and abroad cannot be ignored, as New Zealand pioneers like Angela Aitchison…

“There She Goes.” Moby Dick Move Over as Hunt for Giant Squid Begins

That 19th Century tale of adventure on the high seas is about to be challenged by a 21st century adventure beneath them, when Jean-Michel Cousteau dives off New Zealand’s Kaikoura coast in search of the mythical… 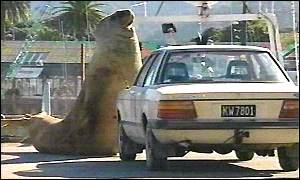 The seal who has made a New Zealand fishing town his home for more than two weeks has finally gone back to the sea. But people who own property on the wharf will be relieved that…