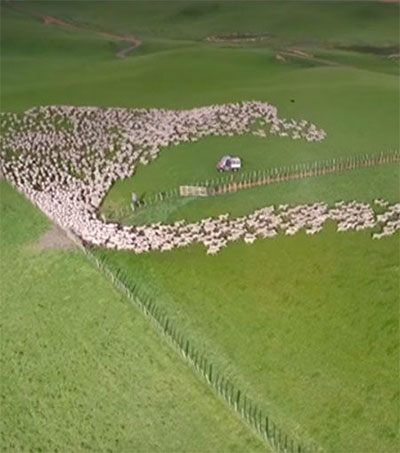 Corey Lambeth, a New Zealand farmer, originally purchased a drone for photography, but he quickly realised the device had more practical applications. “I thought ‘I’ll just give it a nudge on the sheep and see what that goes like’ and it actually worked out quite well,” he tells The Guardian’s Alyx Gorman. Now, Lambeth has been using a drone “pretty much as another dog” to muster sheep for three years.

For some farmers in New Zealand, Britain and Australia, drones are not just a toy – they’re an increasingly vital tool, Gorman writes.

“It’s a significant time-saving when mustering,” says Jason Rentoul, a farmer based in Marlborough, who has been using drones with herds of sheep, deer and cattle for three years. “Some musters might take four men with a minimum of two dogs each, and now [with a drone] you can do that with two men and considerably less time.”

It took a fair bit of experimentation to get to this point. Rentoul purchased his first drone after watching a video of another farmer using one to muster deer on YouTube. In the early days, he lost drones to water damage and once, memorably, while trying to transport a bottle of wine. He tied the bottle to the drone with fishing line, but it would “swing side to side”. The drone would try and correct for the wine’s movement “and the bottle would swing one way and the drone would try to balance” making the wine swing faster and faster, until he eventually lost control altogether.

“I [now] try and keep it fairly simple and low cost,” he says. Rentoul finds the drone particularly helpful when herding deer. Unlike a sheepdog, a drone can outpace a bolting doe. The drone also works well for cattle with calves, which tend to get aggressive around sheepdogs.

Lambeth was particularly thankful for his drone one Christmas Eve. “Me and my partner were sitting out having a barbecue, and we could hear the cows mooing.” Previously, it would have ruined their night “driving out to each individual paddock to figure out where the water leak was”. Instead, “I sent the drone out and I could see their water trough had been knocked over. It only took me 30 minutes.” It was a modern miracle.