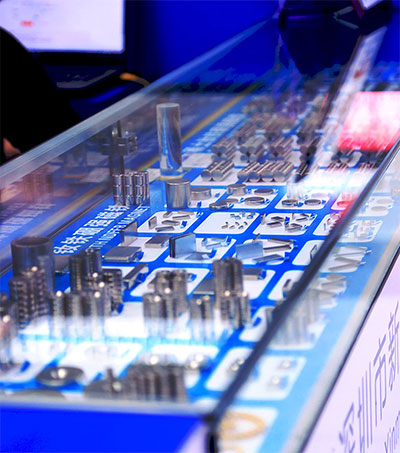 The exhibition title echoes the timely call for “mass entrepreneurship and innovation” in contemporary China.

All newly commissioned for the exhibit, the works on view see a continuation of Denny’s information technology-charged projects. Through his in-depth investigation of Shenzhen’s ecosystem, the artist reflects on the technology industry’s role in reshaping the world’s economic horizons.

Denny visited various types of cultural organisations and tech hubs in Shenzhen, among them the Window of the World (a theme park located in Nanshan District that opened in 1994 and soon became a popular tourist attraction in Shenzhen, squeezing miniature reproductions of cultural landmarks in various countries around the world into a 49-ha playground) and Huaqiangbei electronic market. The two sites each form a unique image of the history of China’s development.

The various large-scale public sculptures endlessly remodelled, replaced, and reproduced in theme parks precisely mirror the individual entrepreneurs enabled by the incubators and accelerators leading the movement of “mass entrepreneurship.”

As several tech markets in Huaqiangbei swept out their old display cases and turned minimalist in style, some even equipped with compartments of laboratory aesthetic, Denny scavenges a few of the abandoned glass counters, and replicates them in the same materials and finish as the theme park sculptures he borrows.

Denny was born in Auckland in 1982. He represented New Zealand at the 2015 Venice Biennale.

Real Mass Entrepreneurship is on at OCAT Shenzhen through 15 June.