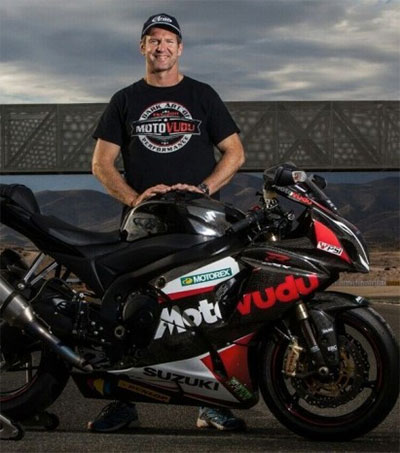 Former Grand Prix winner, WorldSBK racer and now respected TV commentator and reporter New Zealander Simon Crafar is in a sound position to offer some perspective on motorcycle tyre technology. Adam Wheeler interviews Crafar as part of a feature on speed and performance of motorbikes, and the latest tyres, for The Telegraph.

Before Crafar picked up the microphone and headset to fill a ‘Brundle role’ for MotoGP he was running a successful tuition and ‘track day’ media platform that taught riders to be better, safer and faster, Wheeler writes.

He has experience of world championship spec rubber in the days of the ‘tyre wars’ when brands like Michelin, Dunlop and Bridgestone competed for superiority of lap-times but also thousands of laps with punters on the spec ‘sports’ tyres that can be bought through dealers or online and are the direct result of why companies like Michelin and Pirelli (the control tyre in WorldSBK) invest in racing.

“The tyres over the counter are at a very high level now,” the 50-year-old says. “They are not what you have in MotoGP but you wouldn’t want those anyway: they are so hard because they are used so hard. You’d fall off the bike because you wouldn’t keep them warm enough, even on a track day.”

“The big jump is going from street tyres to circuit specific tyres and most products from the brands are so, so good now,” he adds. “Anyone that hasn’t used them won’t understand: it’s more than double the grip. Huge. Street tyres have to work in the cold and these ones don’t, in fact they don’t even function when cold. Once they are heated then they are like glue. Then when you go into Superbike and MotoGP we are talking about smaller steps, small increments of performance.”