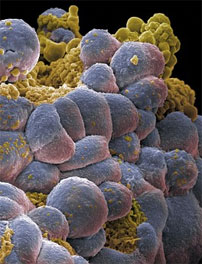 Otago University Professor Michael Eccles and colleagues have found a way to stop the growth of certain cancer tumours by “silencing” a group of PAX genes, members of a small family of genes that play important roles in embryonic development, but also allow cancer cells to grow and divide in adult tissue. In an article published in UK medical journal Oncogene, the researchers reveal how they used the PAX8 gene to kill cancer cells. “We found that these PAX8-depleted cancer cells ceased growing and dividing. The cells were essentially stopped in their tracks through the failure of multiple mechanisms and pathways crucial to their cell division cycle. They then entered into a state called senescence in which they no longer divided, and after that they ultimately died,” Eccles said. The findings suggested that PAX8 could be a good target for the development of new cancer therapies, he said.