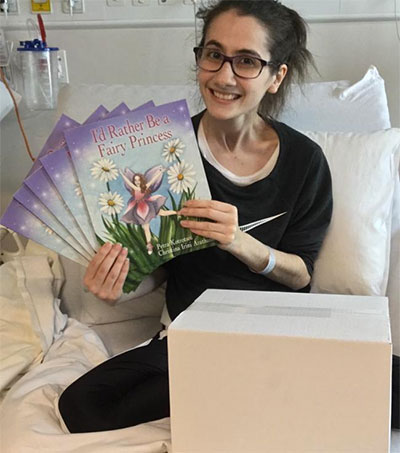 Wellingtonian Petra Kotrotsos is not your average 21-year-old, according to Melbourne-based Greek community newspaper Neos Kosmos. A video blogger and aspiring filmmaker, she’s also a cancer veteran, having been through various treatments since she was just six years old.

Now, Kotrotsos has turned this experience into a picture book, illustrated by another young Greek New Zealander Christina Irini Arathimos.

As anyone can imagine, I’d Rather Be a Fairy Princess is much more than the average children’s book; it’s a survival manual, a spiritual guide and a source of inspiration for anyone affected by cancer, in any part of the world.

Speaking to Neos Kosmos, the writer shares the story behind the book – and her hope to help children get through the biggest adventure of their lives.

“I want the book to be a way for children going through cancer not to feel like they’re alone and to make their experience more manageable and less scary,” Kotrotsos says. “I’d like to help them understand cancer better from the words and viewpoint of someone other than just their doctors and nurses.

“At first, writing the book was just a bit of a distraction really – it gave me a creative outlet and let me express what I was going through in my own way at that time. It was just about recording my own experience and getting it down on paper, so I’d remember it when I was older. I didn’t really think about its value as a published book and that’s why it stayed in my bottom drawer until just recently.

“But now that I have seen how people have responded to the book, I can see that sharing my story means I can help others – especially children – whose lives are affected by cancer.”