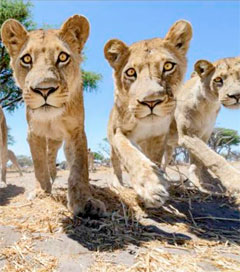 Photography in the Thick of a Botswana Pride

With the help of a remote control buggy, New Zealand photographer Chris McLennan has managed to capture images of a pride of eight lions in the Khwai region, Botswana.

McLennan attached his camera to the buggy for a series of up-close-and-very-personal images, then sat poised with a trigger nearby and drove the buggy into the middle of the pride.

The eight lions – seven females and one male – had been lazing in the African heat after devouring a zebra when the photographs were captured.

The curious creatures soon got up to have a look, eyeing up the equipment before one wrapped its jaw around it.

“It was an amazing experience to witness and document their incredible hunting instincts from such a unique perspective,” he said. “They were an incredible bunch of wild cats – one of the healthiest and most successful hunting prides we’d seen.”

McLennan is from Waimauku. He runs photo tours throughout the world.