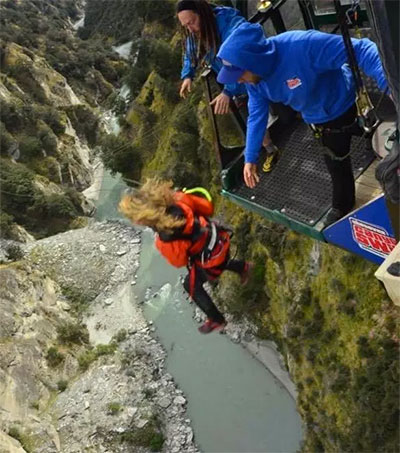 Conquering Heights in the South Island

Adventurer and writer Briton Sadie Whitelocks heads to New Zealand on a two-week tour of the South Island where she leaps off some “terrifying” cliffs, paddles our national parks, and in Akaroa, spots the endangered Hector’s dolphin.

“Fiordland National Park is just one of the many “jaw-dropping places” she visits.

“Other places which leave an impression include Abel Tasman National Park, where we spotted a colony of fur seals while kayaking in the sea, and Westland Tai Poutini National Park, home to world’s fastest retreating glacier, Franz Josef, and a quad biking course,” Whitelocks writes for the UK newspaper, Metro. “And then there’s Aoraki Mount Cook National Park, where we get up for a sunrise hike to sea New Zealand’s highest mountain glistening in the morning sun and stopped to meander around piercing blue lakes.

“I also manage to hop on a helicopter tour while in Mount Cook, to get a bird’s eye view of the otherworldly landscape.

“Our second week sees us journey down to Queenstown, where we take a day-trip to Fiordland National Park to see one of New Zealand’s most celebrated natural wonders, Milford Sound.

“Taking the excitement up a notch, while we’re in Queenstown there’s a mix of adrenaline-pumping activities to choose from.

“The quaint town prides itself on being the ‘adventure capital of the world’ and it is where the first commercial bungee jumping operation was founded in 1988 by Alan John ‘A.J.’ Hackett. While there, I stupidly decide to tackle my fear of jumping from heights with a leap from the world’s highest cliff jump. The Shotover Canyon Swing sees me run and jump off a platform perched 109m over the famous Shotover River and experience a 60m vertical freefall. I’m told off for swearing but to my amazement I conquer my worst nightmare.”