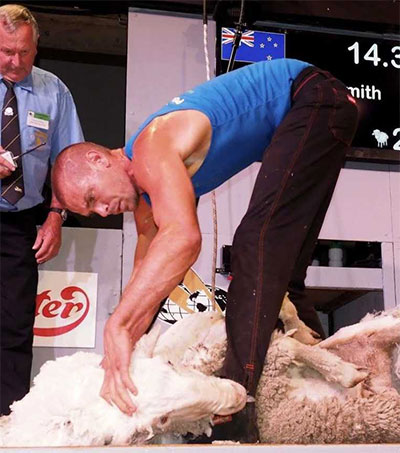 Thirty-year-old New Zealander Rowland Smith has beaten the world record for the number of sheep sheared in an eight-hour period.

Smith, who is from the Hawke’s Bay, sheared 644 sheep from four farms in Devon and Cornwall, UK in two-hour periods between 7am and 5pm.

The previous world record for the ‘Eight Hour Ewe World Shearing Record’ was held by Leon Samuels, from Invercargill, when he sheared 605 ewes in eight hours. Highlighting just how difficult this task is, prior to Samuels’ attempt, this record had not been beaten since 2010.

Smith’s attempt even got the backing from British Wool.

Speaking in advance of the competition, British Wool’s south west board member Alan Marshall, commented: “Shearing is vital to the sheep industry and events like this really help to promote shearing as a sport, and showcase British wool to a wider audience.

“As the agricultural industry faces uncertain times ahead, the camaraderie between British producers in events such as this is seen as uplifting.”

Smith’s older brother Michael, who is a Cornwall-based farmer, won a world record in 2016, shearing 731 ewes in nine hours.

According to Stuff, in 2009 Rowland Smith’s wife, Ingrid, set a women’s solo-eight-hour record of 470 lambs in a King Country woolshed and also claimed a two-stand record of 903 lambs with mother Marg Baynes, of Wairoa.