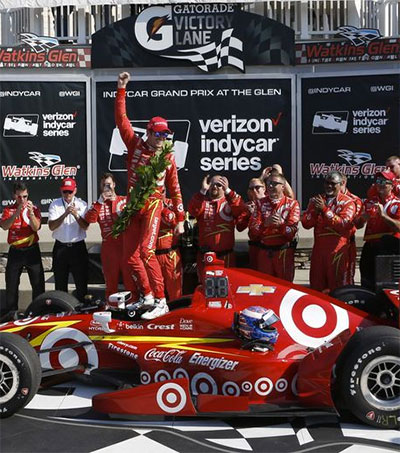 Fastest in every practice and fastest in qualifying, Dixon, 36, won at The Glen with a dominant drive, leading all but 10 of the 60 laps around the 11-turn, 5.43km natural terrain layout.

“These are the weekends you definitely don’t forget,” Dixon said. “I love coming to upstate New York. This track is one of the old school great American tracks that we are lucky enough to come back here and race.”

Once the green flag dropped, he was flawless, consistently opening big leads and saving enough fuel over the final laps to win by 16.5 seconds. Dixon announced after the race on pit road that he was donating his winnings to the family of the late Justin Wilson, who died last August after being struck in the head by debris from a crash in an IndyCar race at Pocono Raceway.

It’s his 40th victory overall, moving Dixon into fourth place on the career list. He also won for the second time this season, and fourth time at The Glen. When the series returned to the course in upstate New York’s wine country in 2005, Dixon won the first three races, his victory that first year snapping a 40-race winless streak.