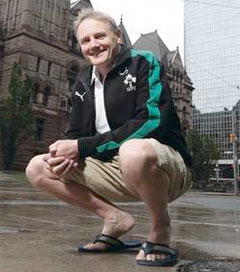 With the words, “you have to start from scratch”, New Zealander Joe Schmidt attempts to dampen down expectations around his new job as he eases his way into the hottest seat in Irish rugby. The new coach’s CV bestows a special kind of pressure. Four trophies in three years at Leinster means people are looking for a similar return in green. He is in Toronto this week as an observer, although it remains to be seen whether he can stick to his commitment to allow interim head coach Australian, Les Kiss full control. Schmidt is building a back-room team, to be completed by July, with plenty of time to prepare for a daunting first season in charge. The schedulers have not been kind to Schmidt, who has little margin for error in year one. His season starts with a Samoa side beating all around them, then sees Australia and New Zealand visit Dublin before a Six Nations with London and Paris on the itinerary. Throw in a tour to Argentina and it doesn’t get any simpler. So, he is using his time in the US and Canada to observe and mingle, getting to know players who were previously opponents to be unpicked. As he looks towards the season, he accepts that pressure will come – especially if November does not go to plan – but as long as there are signs of progress with the processes, he will be satisfied that his message is getting through. “I keep asking myself the same thing. What is going to be the performance measure?” he said. Schmidt’s first head coaching role was with Leinster Rugby beginning in 2010. Under his tenure, the province reached an unprecedented six finals and won four trophies.