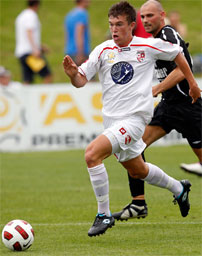 Seventeen-year-old Junior All White Aucklander Tim Payne is the second New Zealander, after All White Ryan Nelsen, to join Lancashire Premiere club the Blackburn Rovers. Payne, who is expected to sign his first professional deal with Blackburn when he turns 18 in January 2012, was one of the standout players at the Under-17 World Cup in Mexico and is regarded as one of the most promising players to come out of his country in recent times. “It has all happened so fast,” Payne told The New Zealand Herald. “At the start of this year, I was focused on getting a start for the Under-17s and hadn’t really thought about the Under-20s. Now I have a chance in England. It is pretty exciting. My goal is to play professionally somewhere and this is a big step in that direction.” Payne is the star pupil of Sacred Heart, New Zealand’s top football school.