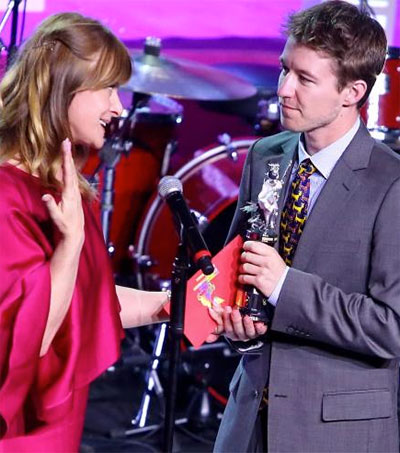 The film was also the first to be nominated for the festival, which has been running since 1935.

Director Dustin Feneley said the team was “stoked” at how well it was received at its world premiere in Russia.

“You don’t really know how it’s going to translate or be received by another culture or another language. The response from the critics and the Russian press and also the audience here has been fantastic actually,” Feneley said.

“All of us in the team are super proud of our little film, made against quite a bit of odds, to not only be selected for a festival such as Moscow but also to come away with an award for best actor which was a really beautiful surprise.”

The film, which is set in the winter in Central Otago, tells the story of the relationship between a young man on parole after serving time for attempted murder and a woman released from a psychiatric facility.

The team crowdsourced $125,000 to make the film – the largest ever amount raised for a New Zealand movie.

Charnock, who grew up in the Wairarapa, has appeared in the mini-series When We Go To War and feature film The Rehearsal, an adaptation of Eleanor Catton’s novel.