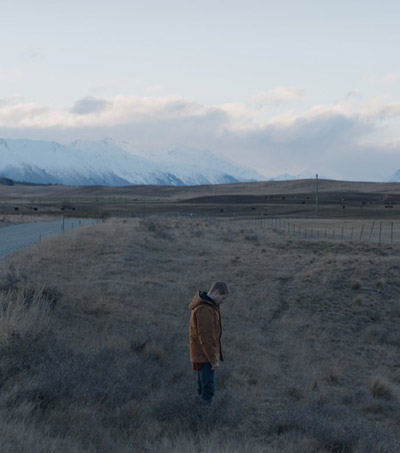 “Independent New Zealand feature film, STRAY, has made history by becoming the first New Zealand feature film ever to be selected for the world’s second oldest film festival – the Moscow International Film Festival,” according to an official statement by Long Road Films. The film will premiere at the prestigious festival on April 19-26, and will be eligible for multiple awards.

Set in the Southern Alps of New Zealand, STRAY “is a compelling arthouse drama about two alienated people who, through their chance connection, ultimately find the strength to move on with their lives.”

“A young man is on parole after serving time for attempting to murder the man who killed his girlfriend in a hit and run. A woman is released from a psychiatric facility far from her homeland. These two damaged strangers cross paths in the mountains in winter and fall into a complex intimate relationship, putting to the test their capacity to trust and heal.”

“The filmmaking team behind STRAY comprises award-winning talent in front of and behind the camera, including rising cinematography star Ari Wegner and Kieran Charnock and Kosovar actress Arta Dobroshi in the lead roles,” as outlined in the statement.

The feature film was written and directed by Dustin Feneley who lives in Auckland and produced by Desray Armstrong, who ran New Zealand production company StanStrong from 2007 to 2011 with producer/director Chelsea Winstanley.