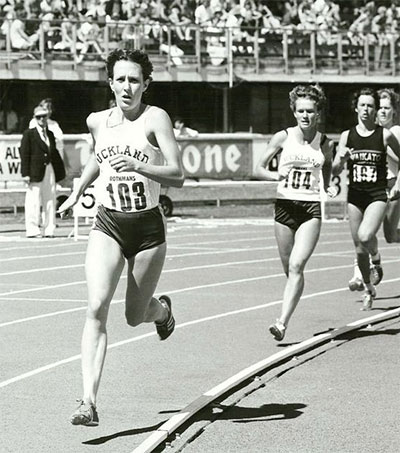 “By the time Anne Audain came to challenge for a place in the world record books, at the age of 26 in 1982, the New Zealander had already overcome a lifetime worth of trials and tribulations,” Simon Turnbull writes in a feature for World Athletics Heritage.

“Born with a bone deformity in both feet, adopted as a baby, Audain almost lost the sight in one eye at the age of seven. She had quit athletics, launched a comeback and been banned from amateur competition for becoming a professional on the US road-running circuit – before mounting an attack on the world 5000m record in her home city, Auckland, on the evening of 17 March 1982,” Turnbull writes.

“Audain was at her invincible peak in 1982. She was unbeaten on the roads in the United States, registering 13 victories in 13 races, all in course record times. The shoes in which she won the Peachtree 10km in Atlanta, in a course record of 32:36, have been donated to the ever-expanding Museum of World Athletics (MOWA) together with the bib number she wore and the trophy she won.

“Now 66 and long settled in the US, Audain is a continuing source of inspiration to the running community and beyond.”