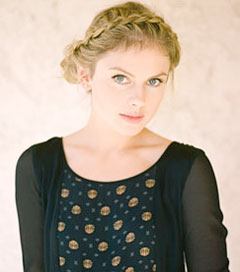 Rose McIver Stars in Flowers in the Attic TV Sequel

Twenty-six-year-old Rose McIver has been confirmed to play the role of Cathy Dollanganger in Petals on the Wind, American cable network Lifetime’s upcoming sequel to its hit adaptation of Virginia Andrews’s Flowers in the Attic.

McIver inherits the role from Kiernan Shipka, who played Cathy from ages 12 through 15 in the first film.

McIver, a New Zealand native, may be known best to American audiences as Vivian Scully on Showtime’s Masters of Sex or Tinker Bell on ABC’s Once Upon a Time.

As her Facebook page notes, McIver also used to study ballet and jazz dance – which may come in handy when playing dancer-turned-teacher Cathy. She joins returning Flowers cast members Heather Graham and Ellen Burstyn, who will reprise their roles as Cathy’s wicked mother and grandmother, respectively.

In December 2013, Zooey Magazine interviewed Auckland-born McIver about her role as Tinkerbell in their “favourite” fairytale show Once Upon a Time. “She welcomed us into her home and it was indeed, a very lovely afternoon with this sweetheart.”