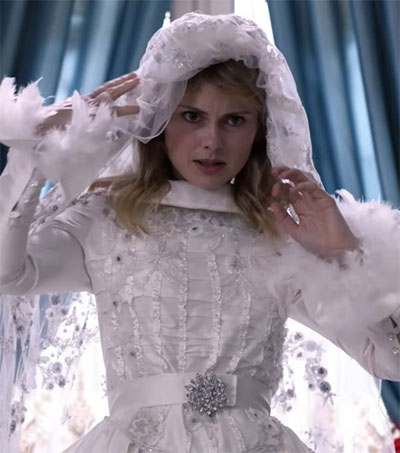 Sure, A Christmas Prince might have served as emotional catharsis for some; for most, though, it was just a fun, whimsical tale. Well, maybe not so whimsical after Meghan Markle and Prince Harry announced their engagement – that only turned the heat up for A Christmas Prince.

So when Netflix announced a sequel to the movie, A Christmas Prince: The Royal Wedding, just days before Markle and Prince Harry’s actual royal wedding, no one was really surprised. That didn’t make fans any less excited, of course.

McIver, 30, who plays journalist Amber, is still taken aback by our culture’s impassioned response to A Christmas Prince. We chatted with her about the film’s cult following and whether the sequel took any inspiration from the Duchess of Sussex. Spoiler alert: It did.

Auckland-born McIver tells Glamour she took on the role because of its Christmas theme.

“I just think it’s fun,” she says. I have every opportunity in my life to do really dark, gritty stories … It was filming in Romania; I’d never been there before. And it’s the kind of movie that I would put on and do a jigsaw puzzle to myself. So I thought, Let’s see whether it works. Let’s see what happens.

“The first film was in and of itself, I thought. Certainly by the time the royal wedding film came up, I had a great look at this young woman who’s shaking up patriarchy and old-fashioned values and bringing a modern eye to what can be quite a dated regime sometimes. She was an inspiration, and we were all on the edge of our seats, watching to see what she’d wear [to her wedding to Prince Harry]. But I had never actually followed royal weddings or anything growing up, so it was new to me. To see the size and the grandeur was pretty incredible.”

McIver is also the star of television series, iZombie. The fifth and final season of the hit show premieres in early 2019.