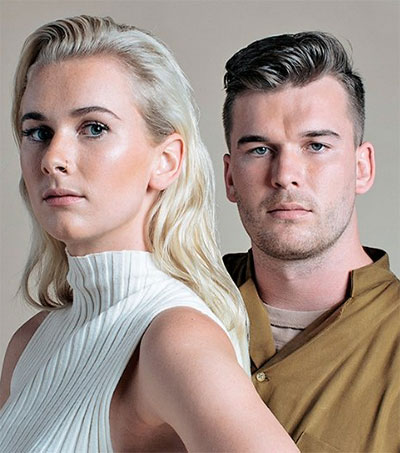 New Zealand indie electropop duo Broods incorporates technology in an unexpected and intimate way, with its enthralling new music video for the latest single, “Heartlines,” off their sophomore album, Conscious, according to Entertainment Tonight.

In the music video, which debuted on 29 July, the veins of Broods’ lead singer Georgia Nott, 22, take on a life of their own, illuminating throughout her body as she performs the song about former lovers reconnecting years later.

To make this all happen, data was taken from Nott’s own body while she wore a Microsoft Band, a smartwatch that tracks everything from heart rate to skin temperature, during filming of the “Heartlines” video. In post-production, that data was translated into something more tangible and visually arresting, hence the illuminated veins that also encompass the actors, New Zealand native Rose McIver and Australian star Oliver Ackland.

“Especially to make it into something beautiful,” Caleb Nott, Georgia’s brother and Broods member, told ET in a recent interview. “Whenever you see that kind of stuff, like a medical machine, it’s very industrial and very harsh. It’s nice to have that translated [in a] pretty [way].”

For Broods, who relocated to Los Angeles earlier this year, it only made sense to decode “Heartlines” in the manner in which they did.

“Lyrically, it really seemed to fit the bill,” Georgia told ET, referencing the line, “I wanna feel your heartlines,” as a key marker. “A lot of songs talk about feeling. It’s all about these emotions that you can’t see – invisible things. When you make music videos, you get to try and bring to life a different sense. [This] satisfies a new sense that you haven’t seen before.”

Broods kicks off its US tour in Washington, D.C. on 1 August.