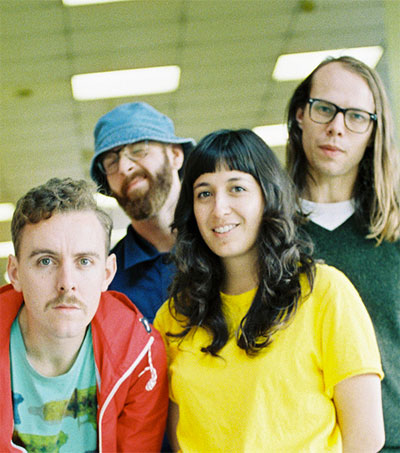 This spring, Elizabeth Stokes, 27, quit her day job teaching trumpet to kids in Auckland. The reason: She was ready to tour the world with The Beths, the exuberant pop-punk band she’d started with three classmates from her days studying jazz at university. “The Beths is almost reactionary to jazz school and trumpet,” Stokes says. “It’s a guitar band. We make guitar music. I like it that way.” The band’s debut album, Future Me Hates Me has just been released in the United States.

Stokes has a sense of humour that’s obvious in conversation, and more understated on The Beths’ excellent LP, Future Me Hates Me. Songs like “Great No One” and “You Wouldn’t Like Me” are peppy, hooky and fun, but also straightforwardly dark in their lyrics. Deciphering the difference between playful self-deprecation and genuine misery is part of what makes the album not only interesting, but acutely human.

The singer-songwriter picked up guitar at age 13 and spent her teens playing in a folk duo in Auckland’s “dangerously supportive” all-ages scene. “It’s very quiet, and they’re very respectful and will laugh at all of your jokes,” she says. “And you’re like, ‘I’m so great.’”

Once school picked up, she fell out of touch with songwriting until the rest of what would become The Beths – guitarist Jonathan Pearce, bassist Ben Sinclair, and drummer Ivan Luketina – encouraged her to scratch that itch. She’d never fronted a band before, but she took to the role quickly.

Many of the best songs on Future Me Hates Me are about Stokes’ reluctant attitude toward romance, and the anxiety that stems from overthinking her feelings. “I never wanted to/I didn’t want to fall/I don’t believe that love’s/A good idea at all,” she sings on the LP’s title track.

The Beths’ real-life friendship translates into an impressive musical chemistry. The band recorded both the album and their 2016 EP in-house at Pearce’s studio on K’ Road, the musical hub of Auckland. And their university training gives them the advantage of speaking the same language. “When you’re with a group of people making music together, it’s a lot of taking ideas in your head and putting them in someone else’s head,” Stokes says.

The Beths tour Australia in September, followed by nationwide dates and then shows throughout Europe, beginning in Kraków, Poland on 26 October.