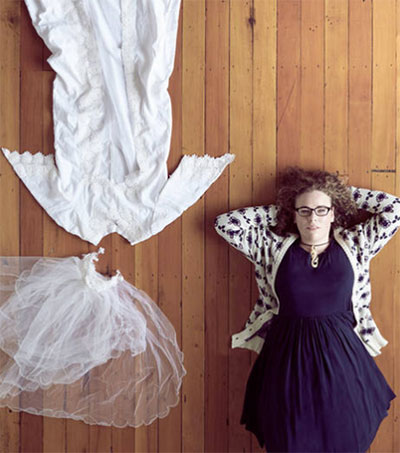 New Zealand-born playwright Rochelle Bright is swiftly earning a name for herself through the success of her breakout stageshow Daffodils, which has just opened at the Edinburgh Festival Fringe as part of the prestigious Traverse Theatre’s programme. Fellow New Zealander, journalist Sarah Illingworth catches up with Bright to find out more.

Bright wrote her first play as a child. She attended drama school in New Zealand, before going on to study music theatre at NYU in New York City. While there she met Steph Brown, frontwoman for the band Lips, and the two began hatching a plan to write theatre together. Daffodils is the product of that union.

The show tells the story of Bright’s parents, an ordinary couple whose love affair becomes clouded by misunderstanding and heartbreak. Lips, the other member of which is Fen Ikner, paired with multi-instrumentalist and producer Abraham Kunin to rework some of New Zealand’s biggest songs as a soundtrack, which the trio performs live throughout the show.

“It’s very much a Hamilton story; a small town, working class couple – one rural, one coming from a small town, one’s a farm girl and one’s a teddy boy,” Bright says. “But their story is told all through New Zealand music.

“[They are a] selection of songs that are some of the most well-known songs that, you know, if you pick up the phone and call the bank it’s what is on the holding music. [They are] songs we’ve heard so many times in New Zealand, and Steph and Abraham and Fen – our band – collectively remixed and reimagined the songs. They’ve got this entirely new sound, and through the story they have this new energy, so you can kind of hear the songs again for the first time.

“Two years ago our dream was to get the show to Edinburgh, so everything we have been doing for the last two years has been touring it to prepare it for Edinburgh. We’re absolutely blown away that we did, and we can’t wait to see how Scots react to it.”

Daffodils is on at the Edinburgh Festival Fringe until 28 August.