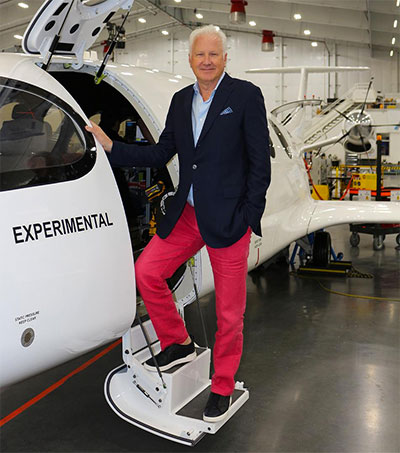 Futuristic electric vertical-takeoff air taxis have grabbed all the headlines – and billions in venture dollars – but Singapore-based investor New Zealand-born Richard Chandler, 63, thinks he has a better idea: conventional battery-powered aircraft that are cheaper to fly and more reliable than turboprops, Jeremy Bogaisky writes in a cover story for Forbes.

For Chandler, the billionaire who controls Eviation and the company that makes electric engines, MagniX, it’s personal, Bogaisky writes. An uncle on his father’s side, George Watt, was an RAF test pilot during World War II who worked on the Allies’ first jet engine. An uncle on his mother’s side, Tony Guina, is a car mechanic turned inventor who worked for years developing high-powered electric motors. For years, Chandler funded Guina’s work – mostly as a favour to his mother. Chandler kicked around the idea of plugging those engines into Jeepneys in Manila to cut air pollution, but it became apparent that they would always be too expensive for buses. Then, in 2017, he was advised that they might be perfect for airplanes.

Like Tesla, Chandler thinks MagniX’s singular focus on electric will keep it ahead.

“We’re climbing Everest here,” he says. “And guess what? It was a New Zealander who got there first.”