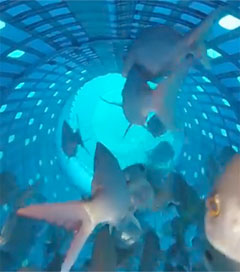 Revolutionary Commercial Fishing Technology Out of the Net

New Zealand says it has developed a technology that will revolutionize commercial fishing with “Precision Seafood Harvesting”, which brings targeted species undamaged to the surface and keeps unwanted catch alive.

The technology replaces trawling nets with flexible plastic liners that allow undersized fish to escape before the remainder are brought onboard, where non-target fish are released unharmed. The method, which has reached commercialisation phase after almost 10 years of research, was unveiled by the government and three fishing companies this month.

Scientists at state-owned Plant & Food Research worked with Sanford, Aotearoa Fisheries, and Sealord Group to develop a “humane” system that doesn’t damage either the targeted fish or inadvertently captured animals such as stingrays and sharks.

Small fish can swim free through “escape portals” in the liners before they are raised to the surface.

The companies said they expect the more environmentally-friendly fishing method to increase the value of New Zealand seafood products. New Zealand’s seafood exports were worth $1.6 billion last year, with China its biggest customer.