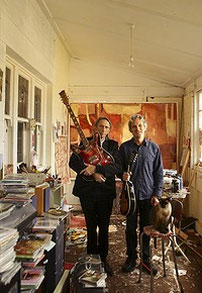 “They didn’t know it at the time, but when New Zealand-born Chris and Peter O’Doherty lost their quietly spoken father 11 years ago, his story wasn’t over and theirs was about to take a few turns,” Steve Dow writes for The Age. “No strangers to life’s twists, the brothers — Chris long ago became known as Reg Mombassa — transformed early from arty nerds to famous musicians as founding members of pop group Mental As Anything, although their painting has provided a constant spiritual anchor. Their father’s secret life as a bigamist with a wife and child living on the other side of the world was revealed in the years after his death, and preceded a bout of song-writing by his sons that is revealingly autobiographical, culminating in last year’s well-received River of Flowers, their fifth album as Dog Trumpet, the duo they formed 21 years ago. And what of Jim after this hard life; did he engage with his sons’ music and art? ‘I think he was proud of it; he appreciated what we did,’ says O’Doherty.” Mombassa’s Coloured In exhibition, opened this month at the FortyFiveDownstairs Gallery in Flinders Lane, Melbourne and runs through July 9.

Tags: Age (The)  Chris O'Doherty  Mental as Anything  Peter O'Doherty  River of Flowers