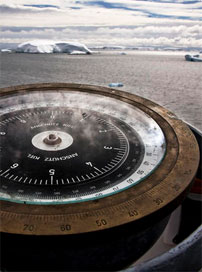 New Zealand scientists Tony Hurst and Stewart Bennie will travel to Antarctica on 28 December to reset the global compass. The pair, who work for New Zealand’s Institute of Geological and Nuclear Sciences (GNS Science), will spend two weeks on ice collecting measurements at two sites to ascertain the exact location of the South Magnetic Pole, where the geomagnetic field lines go vertically into the earth. Hurst said that for the past century, the South Magnetic Pole had been moving northwest by about 10 km to 15 km a year. “The last field measurements in 2007 put the magnetic pole at 64.5 degrees south and 137.7 degrees east, about 50 km off the Antarctic coast and due south of Australia,” Hurst said. “We see it as important that New Zealand plays its part in a global sense by providing accurate measurements in a region of the world where measurements are sparse.”