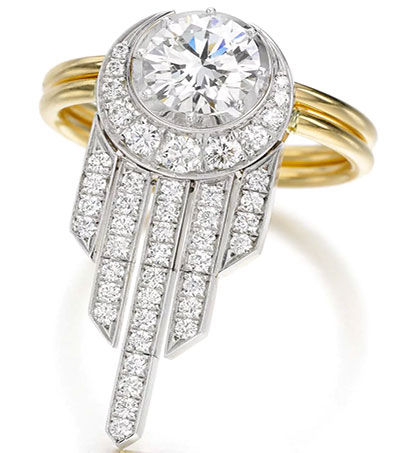 New Zealand-born jeweller Jessica McCormack recently launched not one but two new ranges from her art-filled Mayfair townhouse in London.

The new collections have very disparate inspirations but, as is McCormack’s ingenious way, are united by an air of casual luxury, conquering the entire spectrum from everyday jewels to red-carpet wear. They’re designed to complement the jeweller’s previous ranges – which themselves count Maori tattoos, the skylines of New York, London and Shanghai, Disney cartoons, sci-fi films and sailing among their inspirations – while offering the newness that’s catnip to her glossily manicured clients.

“I wanted each piece to work with your existing Jessica McCormack jewels,” explained the designer at the launch. “So you can stack the rings with your bamboo band or button-back diamond ring, pair the earrings with your gypset hoops, or wear multiple bracelets.”

The bamboo bands in particular work in harmony with the first of the new ranges, Chi Chi, which takes its name from the ancient Chinese fortune-telling practice Kau cim, in which numbered bamboo sticks are shaken out of a box – the corresponding numbered fortune provides a divine answer to any query.

Fast-forward 18 centuries or so for the second collection, Trip the Light Fantastic, which takes the disco era as its muse. Based on a private commission in which McCormack set diamonds from a client’s unworn vintage brooch in a fringed ear-climber, the moodboard for the range depicts a hand crashing through one of those Seventies-style silver foil fringe curtains.

The pieces are versatile in their function as well as styling: a fringed “party jacket” can be made to slot snugly around a client’s existing solitaire ring, and the dancing diamond earring-backs can be worn with any pair of studs. McCormack says she set out to make diamonds wearable; these latest collections prove that mission accomplished, and then some.