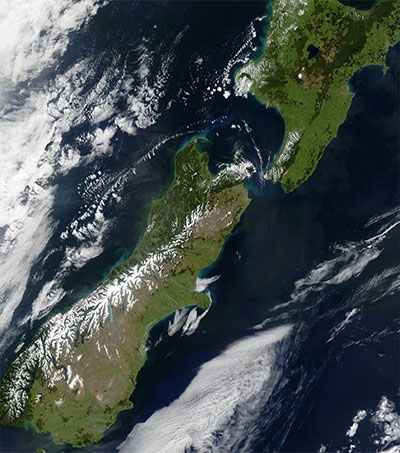 When Victoria University of Wellington researchers drilled deep into Alpine Fault, they stumbled upon a discovery they say could provide a significant new energy source for New Zealand.

The scientists found the water in the Alpine Fault – among the most active faults in the world – was much hotter than expected, and could potentially be harnessed to generate electricity or provide direct heating in industries like dairy farming.

The finding was surprising because geothermal energy is usually associated with volcanic activity, but there are no volcanoes where the scientists drilled. Because the Alpine Fault stretches for hundreds of miles like a spine along the country’s South Island, the energy source could be enormous.

Led by Victoria University professor Rupert Sutherland, the study has just been published in the journal Nature.

Sutherland said the intention of the study near the popular tourist destination of Franz Josef Glacier was to collect rock cores and install monitoring equipment rather than gauge water temperatures, but researchers are excited about their unexpected findings.

“Economically, it could be very significant for New Zealand,” Sutherland said. “It’s a totally new paradigm.”

In their study, the scientists say they believe two actions are creating the hot water.

First, they say, previous earthquakes have moved hot rocks up from deep within the Earth into the mountains along the fault line.

Second, the shaking has broken up the rocks, allowing rain water and snow melt to quickly percolate through the hot interior of the mountains, which concentrates the heat beneath the valleys.

Bill Ellsworth, a professor at Stanford University who helped review safety aspects of the study but who was not involved in the research, said that because elevated fluid pressures weaken faults, the study’s findings also have important implications for understanding the workings of quakes on similar faults around the world.