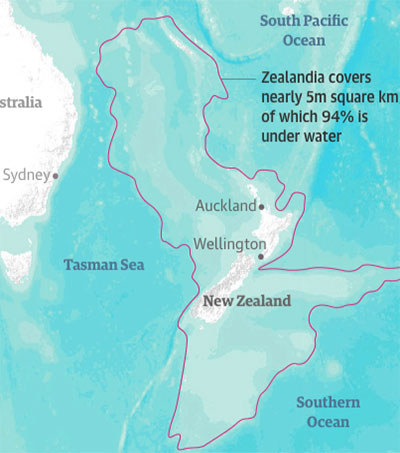 The mostly submerged South Pacific landmass Zealandia may have been closer to land level than once thought, providing pathways for animals and plants to cross continents from 80 million years ago, an expedition has revealed.

Zealandia was declared the Earth’s newest continent this year in a paper in the journal of the Geological Society of America. It includes Lord Howe Island off the east coast of Australia, New Caledonia and New Zealand.

Last week, researchers shared findings from their two-month-long expedition, one of the first extensive surveys of the region, announcing fossil discoveries and evidence of large-scale tectonic movements.

“The discovery of microscopic shells of organisms that lived in warm shallow seas, and spores and pollen from land plants, reveal that the geography and climate of Zealandia was dramatically different in the past,” Prof Gerald Dickens of Rice University, Texas said.

Researchers drilled more than 860m below the sea floor in six different sites across Zealandia. The sediment cores collected showed evidence of tectonic and ecological change across millions of years.

“The cores acted as time machines for us, allowing us to reach further and further back in time,” said Stephen Pekar, a researcher on board the scientific drilling vessel, in August. “As one scientist put it: ‘We are rewriting the geologic and tectonic history of Zealandia at this drill site.’”

The 5 million sq km continent, roughly the size of the Indian subcontinent, is believed to have separated from Australia and Antarctica, as part of Gondwana, about 80 million years ago.

“[The research] has big implications for understanding big scientific questions, such as how did plants and animals disperse and evolve in the South Pacific? The discovery of past land and shallow seas now provides an explanation: there were pathways for animals and plants to move along.”

Further study of the 2500m of sediment core extracted during the expedition is expected to provide insight into climate change and Zealandia’s climate history. The drilling ship is scheduled to conduct further expeditions around New Zealand, Australia and Antarctica next year.