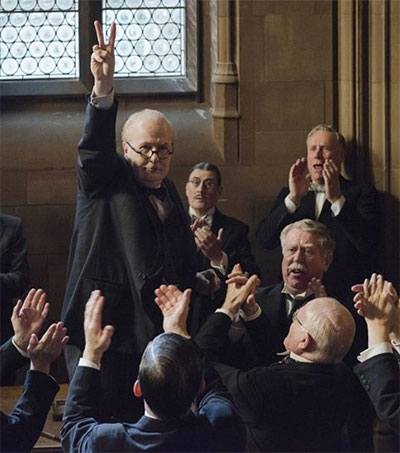 Written by New Zealand-born filmmaker, Academy Award-nominated Anthony McCarten – best known for the screenplay he wrote for The Theory of Everything – Winston Churchill biopic Darkest Hour “is an expertly crafted history lesson that balances the prime minister’s public triumphs and failures with some of his private moments of vulnerability and uncertainty,” Naia Daniel writes in a review of the film for Georgetown University student newspaper The Hoya.

“For the most part, McCarten rids his screenplay of any dramatisation and sick sentimentality as he stays true to history,” Daniel writes.

“The balance between the film’s classic and avant-garde style and its deep shadows and bright highlights transports the audience to the era of World War II.

“Darkest Hour gives its audience total and unhindered access to Churchill and his psyche during his tumultuous early days as prime minister, from his solemn moments of self-doubt and the rising tensions in the war cabinet to a private call with US President Franklin Roosevelt.

“In Darkest Hour, Wright’s Churchill is polished, and his image as a fearless leader is heightened. At the same time, [Gary] Oldman takes control of his role and humanises Churchill, giving the audience a chance to re-envision the iconic figure and the legacy he left behind.”

For The Theory of Everything, McCarten, 56, won two BAFTA awards for his roles as producer of Best British Film and screenwriter Best Adapted Screenplay.

He is also the author of seven novels.

McCarten was born in New Plymouth.

Tags: Anthony McCarten  Darkest Hour  Hoya (The)  The Theory of Everything