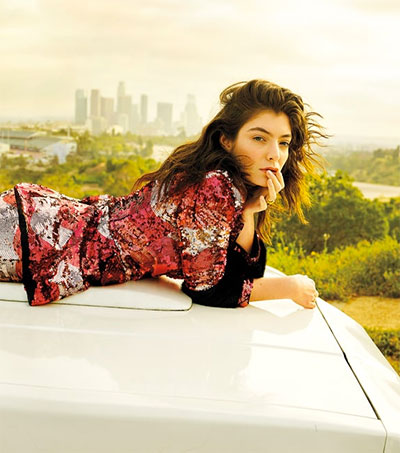 In a cover story for Rolling Stone magazine, Lorde talks about growing up in the spotlight following her hit debut Pure Heroine, and why her new Melodrama, out on 16 June, is the work of a “young woman.”

During a week off from school, she penned Royals, the track that would go on to be the smash hit of the EP she’d soon offer for free on Soundcloud (while simultaneously declining to release any images that showed what she looked like). Meanwhile, she’d intuited enough of what was about to unfold that she gave herself a moniker that was both aristocratically grand and decidedly feminine (with that tacked-on “e”) – a move that would have been pretentious to the extreme had it not ended up being spot-on prescient. “I don’t know, it’s a bit boring: Ella Yelich-O’Connor,” she says now. “Can you imagine them shouting it at a festival?” She shrugs. “It just made sense to me to elevate it.”

Pure Heroine was released in the autumn of 2013, and sold more than a million copies in five months. David Bowie clutched her hand and told her that listening to her music “felt like listening to tomorrow.” Lady Gaga called it one of “THE albums of 2013.” It wasn’t just the album’s precocious musicality (its spare electronic beats overlaid with Lorde’s smoky, syncopated vocals, creating a sound that was part pop, part hip-hop, part jazz and entirely hypnotic); it was also the teenage authority with which Lorde’s lyrics took on and then casually dispensed with decades of pop-music tropes and stereotypes (“Everybody’s like, Cristal, Maybach, diamonds on your timepiece …  We don’t care”). The album was so self-possessed, so in control, so knowing, that, fairly or not, Lorde was hailed far and wide as pop’s antidote to its own artifice.

By the time Lorde turned her attention to a new album, she was, in a sense, stuck on Mars. She found herself in the classic innovator’s dilemma: She had invented a sound that changed the pop landscape. Now, shades of “Lorde” were everywhere – in the breathiness of her singing, in her mix of pop sounds and singer-songwriter candour – which means that to sound like Lorde these days is to sort of sound like a lot of other people. Her singularity had been co-opted, while her horizon had changed. “Her first album was all about being this kid,” says Jack Antonoff, who produced Melodrama. “When your entire life changes, and you’ve built your career on being honest with your perspective, how do you continue to [find ways to relate]? It’s near impossible.”

She no longer listens to Pure Heroine. “That felt like a kid. This feels like a young woman. I can hear the difference.”